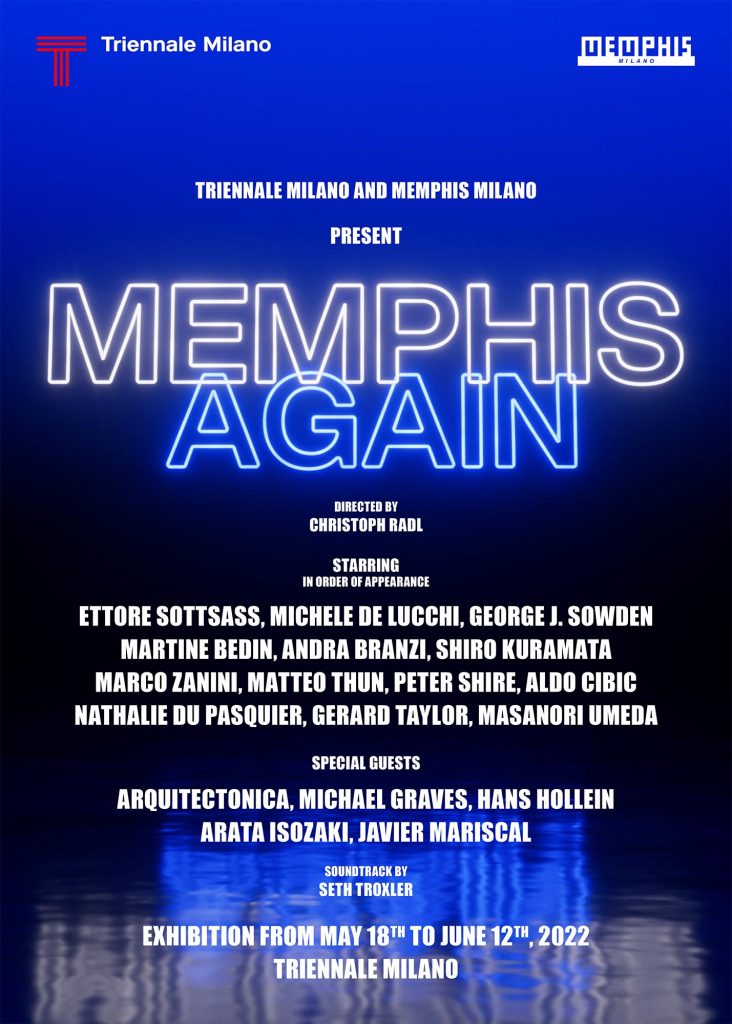 Milano, 21 April 2022 – Triennale Milano and Memphis Milano present “Memphis Again”, an exhibition directed and curated by Christoph Radl to be held in the Curva gallery at Triennale from 18 May to 12 June 2022.

The objects will be displayed in chronological order in the Curva gallery, which is more than 100 metres long, just like a fashion show in which the observer will be the one moving along the catwalk in a space that, thanks to the furniture and the music by Seth Troxler, feels like a nightclub. Quotes by critics, architects and designers will be projected on the walls.

The exhibition is neither an homage or a historicisation. Its objective today, just as it was back then (1981), is that of directing the attention on the expressive and cultural possibilities of a design that goes beyond marketing. Memphis was born with the desire to adjourn the language of design and architecture. An alternative proposition to a design that is imagined especially to solve industrial functional problems, while underlining the emotional, psychological side and aspect of the issue and of the discipline. Each designer, for example, was free to design what they wanted, without any restrictions. Later, when it shifted from being a cultural necessity to becoming, as expected, “projects and prototypes”, a company to distribute and sell was founded. And it worked.

Barbara Radice stated in 1981: “Memphis does not deny functional utopia, but it looks at functionality with a wider vision, more as an anthropologist than as a marketing specialist. Function therefore not only in respecting ergonomic norms or salability statistics, but also in respecting a vision of public necessity, a historic push.”

The need to get rid of certain conventions is still very contemporary. Sottsass: “The fact is that we no longer are scared: I mean the fear of having to represent or not represent something or someone, élites or derelicts, traditions or boorishness. We no longer fear what the past sends along nor do we fear what the more aggressive future sends.”

The importance of Memphis for the world of design can also be seen in Triennale’s Museo del Design Italiano, where the display ends in 1981. With objects, photographs and graphic materials, it offers a special focus on how this cultural movement marked the start of a new era in the production of design both in Italy and around the world
The Institutional Partners Eni and Lavazza, and the Technical Partner ATM are giving their support to Triennale Milano also for this exhibition.

PRESS RELEASE
BACK TO EXHIBITIONS